Discover the pipa, discover Yadong Guan: a mesmerizing musical encounter with one of China’s hidden treasures

Hailing from Beijing, Yadong Guan is a true musical ambassador who brilliantly masters the pipa, a traditional Chinese instrument that is over 2,000 years old. Handling the metal and nylon-stringed instrument with impressive virtuosity, Guan uncovers one of her country’s hidden treasures, offering audiences a truly exotic experience. Those who have been privileged to watch her perform have been enraptured by her profound artistic sensitivity and by the sounds of the pipa, which range from delicate and gentle to brisk and powerful.

Since her arrival in Canada in 1997 (she now resides in Ottawa), the pipa virtuoso, who studied under master Lin Shi Cheng for seven years, has been sparking much curiosity and admiration, whether she presents herself in solo recitals, as a soloist with orchestras (performing works such as Little Sisters of the Grassland, a piece composed for pipa and orchestra) or with various small ensembles. In addition to giving concerts dedicated to traditional Chinese music, Yadong Guan has adapted a wide variety of Western music to her instrument, from classical works (Bartók, Debussy, Vivaldi) to selections from the Quebec song repertoire (Gilles Vigneault, Claude Léveillée).

A gifted composer, Yadong Guan also explores the many technical subtleties of her instrument through her own works. Moreover, the elegant virtuoso has toured Canada on several occasions (with the support of the Canada Council for the Arts), and her brilliant playing is immortalized on two recordings. What’s more, her exceptional contribution to the development of Chinese culture has won her several prestigious accolades, including a ministerial prize, awarded at the UN World Women’s Conference in 1995. Yadong Guan received the award of “The Best Original Score “for the music of movie at the Moncton Film Festival in 2010, an “Outstanding Artist 2010” given by Toronto Fairchild TV and Talentvision TV.

In 2017, her composition <Grandma> has won her Gold award from Chinese children’s song writing competitions held in Beijing. She is also the head of Chinese Canadian Children’s Choir of Canada (C5), the first children’s choir in Ottawa Chinese community that focus on promoting multiculturalism and carrying on experiments in singing with her east-meet-west musical bands.

«She was a knockout! The best act of all the season! Inspiring! » Laurie Peaker said (Vernon, BC, December 2009)

BEIJING VIBE SPANS THE GLOBE
More sensitive than a harp, more twang than a guitar and at least as soothing as a cello, I had never heard the pipa before in my life. If I had, I would have taken it up. It’s beautiful. […] Guan skillfully altered timbre, pitch, volume and tone simultaneously. Touch and texture seemed to change the mood on a dime.[…] It’s hard to get bored with a pipa. It’s a global instrument.[…] Beautiful transitions with a deep quality of listening were created by these refined artists. Such a simple melody and so beautifully played.[…] I was amazed by the variety and quantity of skills needed in mastering expression of the pipa. It’s a life’s work, and only 2,000 years young. By Lisa Talesnick – Vernon Morning Star – December 2009

YADONG GUAN – A PERFORMANCE OF ELEGANCE AND BEAUTY
«One of the more exotic evenings recently featured the distinguished Pipa virtuoso and composer, Yadong Guan, originally from Beijing. The Pipa, a four-stringed traditional Chinese instrument is one of the oldest instruments still in use and this award winning player has done much to explore the occidental repertoire that can be played on this instrument. This gifted and elegant player was accompanied by two renowned musicians in their own right – David Jacques on guitar and Christophe Lobel on cello in a wonderful fusion of music from East and West. The performance, which featured several classical Chinese pieces as well as some by Western classical composers, such as Bartok and Claude Gagnon, received a well-deserved standing ovation from the appreciative audience. It is a rare and delightful experience, to have the opportunity to attend such a performance and the beauty of the musical pieces was matched by the elegance and delicacy of the performer in a gorgeous Chinese dress. » Steven and Ellie Kennard, Evergreen Theatre, Nova-Scotia, April 4th 2009

«The Orillia Concert Association presented Yadong Guan, pipa, accompanied by Peter Rapson, cello and Gerry Elliott, guitar on Saturday, March 21st 2009. It proved to be an extraordinary musical event.Few, if any of our subscribers had ever heard of this ancient Chinese instrument called the pipa. Therefore it was a leap of faith for the 550 + people who came to the Orillia Opera House not knowing what they were going to experience. […] I witnessed the amazing effect that she had on her audience then and to my relief but not surprise she did not disappoint the audience in Orillia. […] When she sang and played a lovely Chinese folk song, “The moon expresses my heart” many people were moved to tears. I have never witnessed this in a concert before. The use of guitar and cello to accompany the pipa was an excellent addition and brought some valuable contrast to the overall sound. All three instruments have their own unique sound and these complimented each other perfectly.

The program was not flashy as so many of our programs tend to be now. Rather it was sublimely satisfying from a musical point of view and for this reason I have had far more positive feedback than I can remember for any other concert that we have presented. They positively loved it! »  Stan Passfield, Orillia Concert Association – Ontario, March 21st 2009

« The Trio Yadong features Yadong Guan on pipa, a young Asian woman of astonishing virtuosity; «Claude Gagnon has managed to expand on an already superb work by Manuel de Falla, ‘La danse du meunier’, with the inspired participation of the pipa and the ardour of the cello played by Carla Antoun » Luc Proulx, Nord Info, Sainte-Thérèse de Blainville 2005

« The she-devil with the black mane and slanting eyes plucks exquisite ‘portamenti’ and ‘vibrati’ from her lute that burst out into the air like firework » Guy Fournier, ‘LA MARQUE’ magazine, published by the Orchestre symphonique de Québec 2005 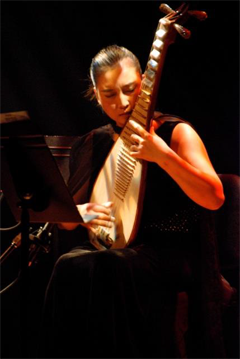 Mentioned in Chinese passages which date back to over more than 2000 years, the pipa is one of the most ancient instruments still played in present times. During the Tang dynasty, between 618 to 907A.D., pipa became the most appreciated instrument in China. Since then, its popularity has never decreased over the centuries, while its repertoire and technique have been transmitted and developed from generation to generation.

Stringed with four metal strings, the modern pipa benefits from a range of more than three octaves due to its thirty frets, which are placed up to the center of it resonance chamber. Except when using five fingers on which artificial nails are placed for each performance, pipa shares some play techniques with classic guitar such as tremolo and arpeggios while its pear shape recalls the European lute.

Many years of training and practice are essential for the artist who wants to make the most of all the expressive resources this instrument offers. This is so because of its imposed technical requirements as well as the multiple subtleties that interpreting its repertoire represent.